Stay Tuned for our reviews of Best Night of My Life, the new album by American Authors - coming soon! Look for their new album - coming out Feb 10th!!

Nancy Drew and the Hidden Staircase - out everywhere on March 15th!

Host @itsjulialee covers the #redcarpet of the new #NancyDrew movie #nancydrewandthehiddenstaircase premiering in LA today, March 10th! Here she poses with lead actress #SophiaLillis, who plays Nancy Drew!! The movie comes out on March 15th!! Official IMDB Page here: https://www.imdb.com/title/tt8323104/ Storyline: A bit of an outsider struggling to fit into her new surroundings, Nancy and her pals set out to solve a mystery, make new friends, and establish their place in t
0 comments
By Elena Moscatt

We WON at the New Jersey Web Fest!! Best Host and Best Unscripted!

Congratulations to Johnny Alonso and Julia Lee for being Nominated for Best Hosts at the first ever - New Jersey Web Fest!! Johnny WON!! Here's a video of Johnny's win: And Congratulations to Shira Girl for being nominated as Best Guest Star!! And to our show for being nominated as Best Unscripted Series!! We are heading to New Jersey this weekend - we will take many many pics plus do interviews with nominees, creators, producers, actors and of course the guys that run this
0 comments 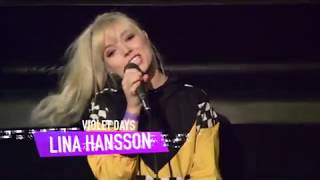 Here's a Preview of our Interview with Lina Hansson - hosted by Julia Lee Julia met with Lina and her band Violet Days during a "School Night" event at the Bardot nightclub in Hollywood, Ca. "It's A School Night" is an event at the Bardot nightclub that celebrates the upcoming and independent music scene. For more details on School Night - Click On This: http://www.itsaschoolnight.com/ In this interview host Julia Lee talks with Lina about touring, about writing music, and a
0 comments
Hosted by Julia Lee, Filmed by Desole

“I wasn’t really trying to give women their first break. I was trying to find the best director, writer, or below the line individual, and if they happened to be a woman, I would hire them. Other guys would look only at men, while I would look at the talent irrespective of their gender.” – Roger Corman, Etheria 2017 Etheria Film Night is an annual showcase screening of a progressive slate of genre films directed by women for an audience including producers, managers, show run
0 comments
bottom of page